At CES 2019, Shure revealed their latest addition to their impressive range of audio equipment: The Shure MV88+ Kit. This is a microphone for your cell phone that won several awards. But why do we even need a cell phone mic? Doesn’t your phone already have a microphone built-in?

Yes. BUT there is a but.

What is missing from your phone’s camera?

When we see an awesome event unfolding, our instinct is to grab our phones and hit RECORD. We want to capture everything, save it forever, and share it with our family and friends and this is all possible with the incredible cameras that are built right into our phones. However, there is an issue when filming with our phones:

Even if the quality isn’t so good, or the video is a bit dark or shaky, we are willing to put up with it. However, we are not able to put up with BAD AUDIO.

It is just too frustrating to watch a video that you can not hear and are straining your ears, testing your lip-reading ability to make out who is saying what.

Why are phones bad at audio?

Phones are not bad at audio. In fact, they are pretty good. The phone’s microphone is built to pick up your voice when you are nice and close ie. recording a voice note (if you are a millennial and above) or when making a phone call (for those who still do that). The mics are terrible when you are just a little bit away from your phone and they just record everything around you making it virtually impossible to hear you.

This is where the Shure MV88+ kit come in.

What makes the Shure MV88+ Kit the solution to cell phone audio problems?

There are a couple of reasons why vloggers, streamers, podcasters, musicians will love the MV88+.

Firstly, it’s a complete kit to capture sound on the go for those podcasts, music jam session, or live event. It comes with a Manfrotto PIXI Tripod, phone clamp & shoe‐mount mic clip, USB‐C & lightning cables which make it ready for audio and/or video capture right out of the box regardless of your phone type  – Android or iOS both work. 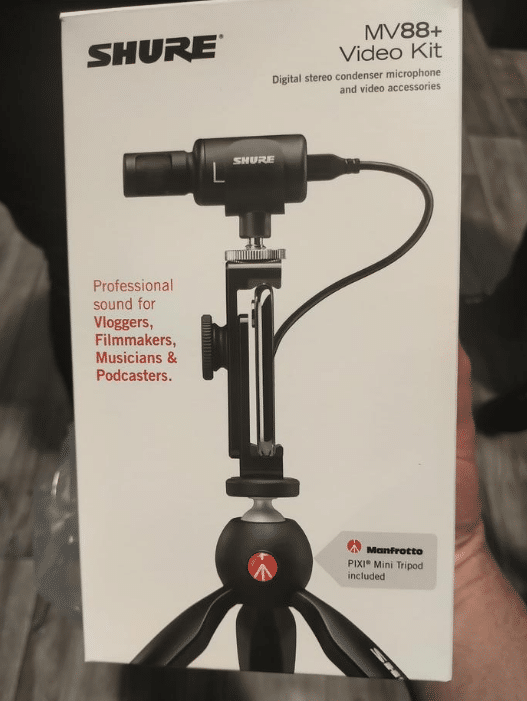 Secondly, the ShurePlus MOTIV audio & video apps are bundled for free with the MV88+ which gives you great control over both the video and the sound for pro-on screen adjustments. For those who don’t want to fiddle with the settings, there are presets that you can simply tap on and the mic is automatically optimized for that scenario.

Thirdly, you can monitor your recording live ie. you don’t have to wait until after your recording to listen and see if what you captured was clear and the volume set correctly.

Fourthly, and this is the BEST bit (in my opinion), you have full control of the sound you are recording. If you are filming a large music event you might want to capture the atmosphere so you want your phone to capture the sound from everywhere. However, a moment later you want to go into selfie mode and talk to the camera about the event. With the Shure MV88 cellphone mic, you can fire up the app,  and simply select the situation and the mic will automatically adjust from picking up all the sounds from all around to only picking up your voice.

For the more technical,  you can set the mic to pick up various recording polar patterns which you can change by simply swiping. You can choose between Stereo, Mono Cardioid, Mono Bidirectional or Raw Mid-Side. Therefore, regardless of what you are filming, there is no reason to change your microphone but you simply select the mode.

Moving from scene to scene is simple and going from one on one interview to group audio capture to entire area capture is such a win!