How to repair a corrupt video file

Note: this is a sponsored blog which occurred after my file corrupted incident. All opinions are 100% my own.

Hard to believe, but apparently, saying NO over and over again, does not fix a corrupt video file…

Yes, that is how my day started. I was on a tight deadline to deliver to a client an interview series that I filmed and while I was transferring a file from my camera to the computer, the camera switched off for some reason. That corrupted the file and now what do I do?

The file that I could not open contained critical information from that interview which could not be re-filmed as the client already flew back to her home city.

This was not good news.

As I was running through the “I am so sorry here is a full refund” scenario in my head, I realized that the corrupt video file was actually 302 Megabytes in size. This meant that there was information in there which just needed to be extracted somehow.

I combed Google search results looking for a tool that could do the job and after trying several which promised the world but failed, I found the Remo Reapi MOV video repair tool.

What is the Remo Repair MOV tool?

The Remo Repair MOV is a tool that allows you to repair a damaged, corrupt, or unplayable MOV or MP4 files. These file formats are typical file formats from used in cameras, video cameras, cell phones, and action cams.

A file can become corrupt for various reasons as ultimately a video is data which is being encoded by software on the camera and written to the SD card. Things go wrong with software. I recently shot some drone footage and it was so hot in Dallas, that the tablet shutdown midflight and the footage was lost.

How does Remo repair the file when so many others failed?

The reason Remo is different from the several other tools I tried is that Remo uses a “Healthy” file to understand the structure of my movie file. I assume it analyses the header, the data and then uses this information as a type of template to rebuild the corrupt files with that same healthy template structure.

How to use Remo to recover a corrupt MOV file?

Simplicity at its best. When you launch the Remo app, there are only two tasks you need to do: 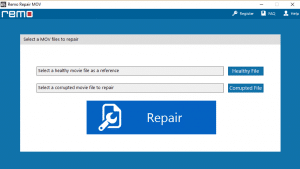 The first is to point the app to a Healthy movie file on your computer. Any file will do.

I am glad to report, that my interview file was recovered successfully, and I was able to deliver to the client. Having the app literally meant the difference between a refund to the client and getting paid for the job. I am glad it is part of my armory of tools now.

For more info head over to https://www.remosoftware.com/remo-repair-mov

12 thoughts on “How to repair a corrupt video file”