This FREE app lets you SEE your WiFi Signal!

It is really challenging to get the fastest internet speed and the best WiFi. There are numerous elements to consider that all need to work together to give you that amazing connectivity. After purchasing the fastest internet data plan you can afford, you need to consider where to place your WiFi router for that optimum wifi coverage. It really would be helpful if you could actually see your WiFi Signal.

Whenever you ask where to place your router, “place it in the middle of your property” would typically be the advice. This way, the wifi signal is spread all around and gives you the optimum coverage. HOWEVER, your home’s layout can severely impact the WiFi speed. WiFi struggles with thick walls and other interferences which all need to be taken into account.

The best position for your router ultimately boils down to trial and error.

Once it is in place and you set up the router’s antenna in the best position, if your WiFi coverage is still poor in some areas, you can replace the WiFi antenna with a high-gain antenna and add a WiFi extender or a Mesh WiFi network.

All of these will help.

However, what will really help is being able to see your WiFi signal. If you could, you would know where the signal is strong and where it is weak. You could literally see where you place your Smart TV or your PS4 for that fast game-play with no lag.

How to see your WiFi Signal

There are two great free apps that allow you to see your wifi signal. The more visual app works only on Android. You can find a similar all for iOS however it isn’t free. The other works on both Android and iOS and is free on both. 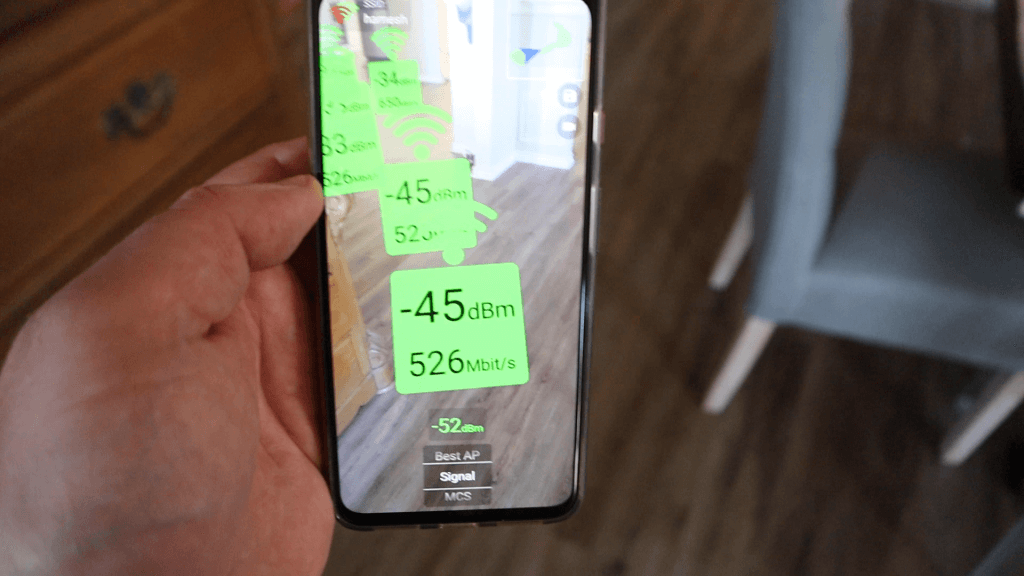 The App is called WiFi-AR. As the name suggests it is an Augmented Reality app. Simply install the app, launch it, and hit the Start button. WiFi AR will activate your phone’s rear camera. When you start the process, the WiFi AR app detects your WiFi speed as you walk around your property. You can then look around through the app and see your WiFi signal at every location.

Now you can see where your WiFi signal is strong and where it is weak in your own home.

If a critical area in your home is not blanketed by the WiFi and therefore not achieving the desired WiFi speed, you can move your router around until it does.  Keep using the app to see where the signal changes. You can also add extenders in the right location so that your WiFi signal reaches the areas you want to be covered. 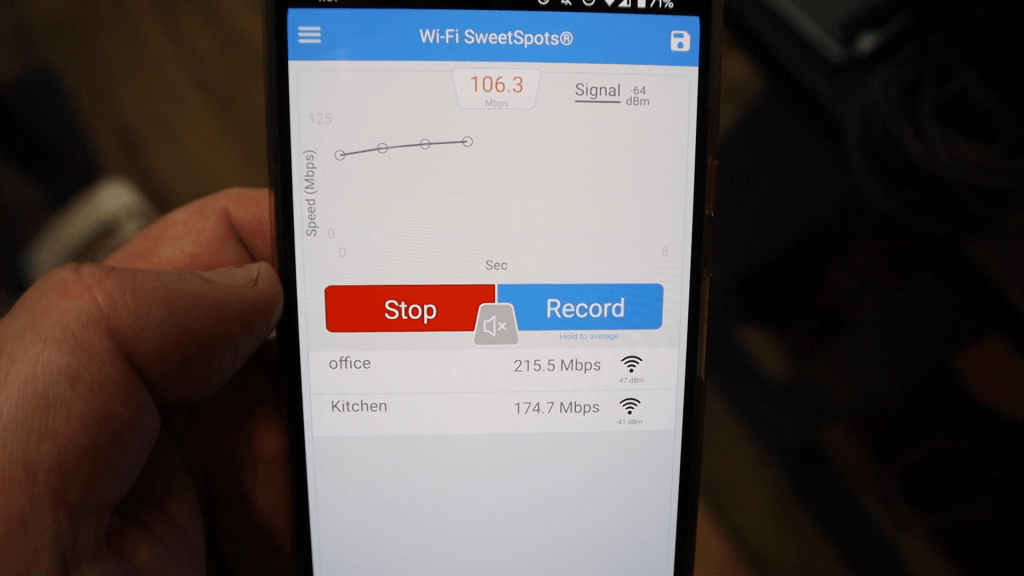 The WiFi SweetSpot app works on a similar basis as the WiFi AR app just without the fancy Augmented Reality bit.

Once you fire up the app and start the monitoring, the WiFi SweetSpot app starts to display the WiFi signal in your location. You can move around your home and watch the signal fluctuate. If you switch on the audio, you will hear a beeping sound. The faster the WiFi, the more rapid the beeping. The slower the WiFi, the less frequent the beeping.  The idea is for you to move around until you hear a nice fast beep sounds so you know this is the area with the best WiFi.

When you enter a room, let the signal stabilize and hit the Record button. This will show an average speed in that room. You can also label the rooms as you do this.

Now you know where your signal is strong and where it is weak allowing you to make a decision on where to place your router and/or your WiFi extender.

Where is the best place to places your WiFi Router?

WiFi signal has a hard time going through thick walls, metal objects, and other interference. This is why you need to use the app in this article to actually see the wifi signal at every spot in your home so you can get the fastest wifi and the fastest internet.

Should you use 2.4Ghz or 5Ghz and whats the difference?

Do you need a WiFi Extender/ Booster/ Repeater?

all of these are used interchangeably but essentially they boost your wifi to areas that have poor signal. You place these devices near the edge of the strong WiFi and they extend the signal to areas that don't have WiFi

Does a Mesh Wifi really work?

Short answer is yes - Mesh WiFi handles the WiFi in a more intelligent way so it can avoid heavy data traffic nodes and move your data faster to and from the internet. Less buffering, less lag, more internet speed!

5 thoughts on “This FREE app lets you SEE your WiFi Signal!”