Mention the word TikTok and you will be greeted by a mix of responses. Some will swear it’s the Chinese government stealing everyone’s information. Others will say its an app used by kids to create goofy videos. Some will say it’s an amazing platform for people to be creative and even businesses use it for exposure to reach that younger demographic. Some might say the TikTok algorithm shows inappropriate content.

Regardless of your view on TikTok, you can’t ignore a platform that has over 800 million users who share short videos.

With the recent TikTok Banning Drama, it seems like many users are looking for an alternative app “just in case” it gets banned. Some are turning to byte, some are experimenting with Instagram REELS which “borrows” many of its features from TikTok. But some are turning to an app that every parent needs to be aware of: Likee. 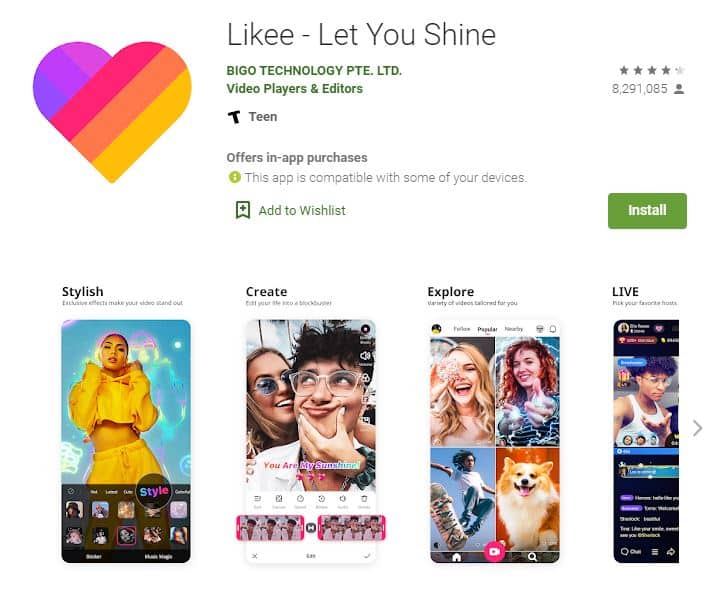 When recording short videos on Likee, users can use video effects such as 4D effects and an AI face swap feature called FaceMagic, where users can turn their faces into famous actors and artists. The app promises users that by using Likee, they can “meet tens of millions of celebrities and talented artists from around the world, but also get to make friends with young people from your city or near you!“

The app also promotes how its users can gain popularity through their videos. Through their Creator Reward program, users can earn a living based on how many views they get per video. Additionally, Likee also has a Creator Program where users can receive professional training that can help them become the next “internet sensation,” as explained by Likee.

While Likee’s features sound good, there are many underlying issues about the app concerning privacy, data-harvesting, and overall safety of users; especially younger users.

Once users sign up on Likee, other accounts to follow will immediately be recommended as a way to get you started. This means that your account automatically being recommended to other people without your consent.

I created my accounts and within minutes I received a whole bunch of messages from people I obviously didn’t know:

There is also a built-in web-browser that launches when a user opens up social-media websites like Instagram while using Likee. How that browser works, what info it logs, and where it routes the data through is unknown.

Possibly one of the biggest privacy issues about Likee is that there are no private accounts. The only privacy settings available on the app are blocking messages and comments; and, even if a user is blocked from messaging, they can still access each other’s videos.

This is a BIG issue. When my kids were younger, any social media app that they were on HAD to have the option to set their account to Private. This way they and their friends would still be able to use the app, but it was only with people they knew – not random strangers. The fact that Likee doesn’t have a private account setting is ridiculous.

By default, location data is also enabled on Likee. When not turned off, users will appear in a feed called nearby that shows videos of users who are located close by and vice versa. DANGER ALERT!!! So now random strangers watch your kids in the app and know that they are in the same proximity as them???? WTAF!

There is Parental Control which disables some of these features which is password protected. However, this password needs to be reset every 7 days? Why?

Beware: Likee is filled with fake accounts, inappropriate content, and what can only be described as predators. When viewing parental reviews on the Google Play Store, parents have mentioned their kids being asked for inappropriate photos and personal details in exchange for beans — the app’s monetization currency.

Beans and Diamonds are used on Likee to allow users to donate real money to other users. By using and receiving beans and diamonds, users not only receive funds but it also serves as a way to increase popularity within the app. In other words, if you want to get famous, you need to spend money. Prices for these range from $.99 to $120.00!

By browsing videos on Likee, it is quickly apparent that there is a lot of inappropriate content including nudity, violence, and explicit language. Considering that the majority of Likee’s users are typically young, this is unacceptable.

Even when mature videos are blocked from appearing in a user’s feed, these are still searchable by hashtags!

Other Issues to be aware of

The content alone on Likee should stop anyone from using the app, but the app also has issues with data storage in China. Likee’s affiliated companies are based in China and Singapore who store users’ data. How much data and what kinds of data, is not disclosed so one can only imagine. The Privacy Policy is rather telling too…

In my personal opinion, Likee is an app that is not safe to use for anyone and all of its issues must be known by anyone considering using the app.

Parents should be specifically aware of this app and even though the minimum age to use Likee is 16, there is nothing stopping anyone younger from ticking that box and creating their account. No email is even required to set it up – just a phone number…