The Galaxy Fold – THIS IS NOT A REVIEW!

WARNING: This post is a bit of mix. It’s a bit of rant about the state of the Galaxy Fold, the Influencers, and then it comes full circle to end positively with Casey Fold video. So buckle in kids…

I watched as the Galaxy Fold was being announced and together with Travis MCP. We did a live stream and we were giddy with excitement to see it…eh…unfold. After the hype died down, I realized there were elements that Samsung didn’t say or show during the event which left me with these questions:

Fast forward to April and the Galaxy Fold is available for pre-orders. And even at nearly $2000, it was sold out with many taking to Twitter showing screenshots of their orders being declined or not being able to place their order due to “out of stock” messages.

Of course, the usual influencers received their Galaxy Fold from Samsung and hundreds of videos starting showing up on YouTube showcasing the new Galaxy Fold in real life.

I have been inundated with questions about the Fold and since I don’t personally have one, I can’t really answer them. I took to YouTube to search for answers but this is where it goes Bad. Ugly. Good.

The reason for the excitement or maybe over-excitement is because up to now, the media has not had the opportunity to have any hands-on time with the phone. Typically at a launch event, after the presentation, the media is ushered into the joining room where the devices are on display. That is when we get our hands on the unit to touch and feel and use the phone for the first time.

This was not the case with the Fold.

It was announced along with the other Galaxy S10 devices, but it was not available in the experience room.

This is the first time that I can remember when both influencers and Tech publications got to play with it for the first time at the same time. So the race is on for the mad frenzy to get content out ASAP and get those views!

A first impression is NOT a review – know the difference.

What you will see is many videos titled along the lines of Galaxy Fold Review where the person goes on about the features of the phone. That is not a review. At best that is a “first impression”.

A review is when you have the phone, stick your sim card in it, use it for a couple of weeks as your only phone, and then you experience it in the real world. That is when the pros and cons come out. That is when you realize how good or bad the battery life really is or how awesome or how crappy a feature really is. A review goes way beyond the marketing hype. A review allows you to make a buying choice.

Nothing wrong with a first impression video, but then label it as such.

The Flex and Return.

In the USA with its pretty flexible return policy. Therefore, there is SOME practice (not everyone) of buying the latest tech, flexing about it on social media, creating a bunch of videos, and then returning the phone.

I can’t support this practice.

I think it’s disingenuous going into a purchase knowing that you will return the phone just to create content around it. It also taints the review.

This brings me to Casey Neistat’s phone video. THIS is how an initial review video should be done. Its entertaining, it has the right balance of tech specs and real-world usage and a nice opinion piece at the end.

Here are my takeaways: 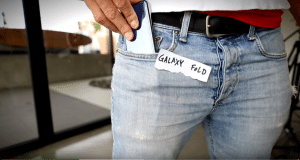 (not this is NOT sponsored by Casey in any way. Just saying before the DMs start)

Be aware. If you are thinking about this phone or any phone, need to go beyond the hype. Ideally, wait a bit. It’s like a new software on your computer or phone – those who install early, face all the issues. Those who wait, benefit.

First impressions are wildly different to review. Just going to leave it there.