Can a $50 budget WiFi Router be any good for fast WiFi Internet, Streaming and Gaming?

Is it possible with a cheap budget router to get faster WiFi, faster Internet speed, play games without lagging, and stream without buffering?  We all want these things and we want it without spending a lot of money. So when Rock Space reached out to offer me their Rock Space AC1200 dual-band Smart WiFi Router that only costs $50 – I was in!

I know Rock Space. I previously tested the Rock Space Whole Home Mesh WiFi which was just incredible. However, it comes with a serious “downside”; it costs $130. Realistically it is worth it but not everyone can drop that kind of cash. [If you missed that Mesh WiFi review, check it out here]

What do you get in this budget WiFi Router?

When it comes to WiFi routers, I look for speed and coverage. The Rock Space Ac1200 router has 4 x 5dBi high-performance antennas and is equipped to cover 1500 sq.ft. Of course, based on the home’s makeup this distance varies as thick concrete and metal obviously interfere with the signal. If you do find that you need more coverage, check this out before buying WiFi Extender or WiFi Mesh System – the two are not the same thing!

I play the original PS4 and that can only connect to the WiFi at 2.4Ghz. While it may be tempting to buy routers that are not dual-band, you would be wise to remember that older devices might not have the 5Ghz network ability; especially Smart Devices. This is why I look for routers that have dual-band facilities and this one does. You get up to 867Mbps on the 5Ghz and 300 Mbps on the 2.4 Ghz.

It also has 1x WAN Gigabit LAN port to connect to your ISP’s Modem and 3x  Gigabit LAN to create your network if you want to hard-wire anything in.

We call old routers, the polite routers because they “talk” to one device at a time. Only when they are finishing handling the data request for that one device will they assist the next device. So as 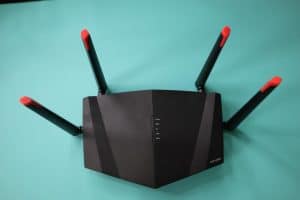 polite as this is, it means the more devices you have on your network, the slower the traffic moves.

This Rock Space router is not so polite!

It has Multi-user, multiple-input, multiple-output technology or MU-MIMO and this is a wifi game changer. With this tech, your $50 Rock Space router can communicate with multiple devices at the same time. This means that it decreases the time each device has to wait for a signal and inturn this dramatically speeds up your network. Less time to wait to get data from the WiFi router translates into more data you get to consume. This is heaven for gamers and streamers who can’t afford to lag or buffer.

It also has Beamforming technology which is a technique that focuses the wireless signal. Instead of the signal being sprayed everywhere hoping to hit a WiFi device, Beamforming tech aims the signal at the receiving device which is done via complex equations. The result is a more direct connection that is not only faster but more reliable.

So is it worth buying the Rock Space AC1200 Budget Router?

It does feel “plastic-y” but since this is a unit that simply sits on a shelf somewhere and it not involved in heavy-duty daily movements, the cheap plastic-covering really isn’t a big deal. It also does NOT have an app to control the unit and that needs to be done via the web browser.

The router has all the functionality most people need and even some advanced functionality for us geeks. After having used it for a while, and running all sorts of weird stress testing experiments, I can say yes. For $50 you do get a lot for your money.