What do you really need your phone to do?

Send text messages, browse the web, get directions to your local whatever, check your social media, take great pics, watch some videos and listen to music. Oh and make the occasional call while having a battery that lasts all day.

I would say that you would be hard-pressed to find a phone that doesn’t all of that.

Yes, some phones have better cameras than others.

Yes, some phones have better speakers than others.

Yes, some batteries give up at 8 pm and others can go until the next day.

But what I don’t get is how an average phone user is willing to spend thousands on a phone just to say they have the latest when in reality there are amazing options at the mid-price point tier.

Since Google sent me the Google Pixel 5a, I have been using it as my main phone. So it’s been about a month or so now and once again I have to say, I don’t get it.

I don’t get so-called tech influencers who use a phone for a day or a week and declare their “review”. Call it a “first impression” – now that I understand, but a review would entail actually using the phone for what it’s meant to be used for and not a couple of hours installing 3 or 4 apps and calling it a day. *sigh – those who know me, know that this has been my pet peeve for a long time now. Oh well. Rant Over.

The Pixel 5a Battery

I don’t care about the 120Hz refresh rate. There I said it.

I don’t care about a gazillion times zoom that you will use never because it’s so pixelated.

And no matter how many so-called must-have features a phone has, without a battery, the tool is useless.

To say that the Pixel 5a has an all-day battery is an understatement.

In my entire month of using it, not a single time did I have to worry about running out of power even when I was using high-demanding applications like Zoom and Google Meet over 5G while using Google Maps with Bluetooth in the car.

At no point did the phone overheat but I will note that I was using it without a case so that 4,680mAh and its battery management really work well.

In my experience, it takes about a week for the phone to recognize your routines, the apps you use vs the apps you have installed, and then the battery management kicks in shuts down apps that you don’t normally use and are just running in the background.

I always thought of a phone’s IP rating for dust and waterproofing was just “in case”.

You know, in case you got water on it by dropping it in the toilet or getting caught in the rain. Wit the Pixel 5a, I tested submerging the phone underwater just to test what would happen to the connectivity: can you still use WiFi, Bluetooth and use it as a hot spot?

Here are some videos of that:

Google smart imaging processing is still right here on the Pixel 5a. This means that even if you are not a photographer, snapping pics of your kids or that must-share cappuccino means that the images will come out stunning with really very minimal effort.

While the Pixel 5a handles low light conditions just fine, it’s not going to win you an award for night photography. But if you are snapping a pic of your night out with friends, your images should be totally useable.

Check out this video from Juan:

The Pixel 5A obviously supports 5G, however, not all 5G networks are the same. The Pixel 5A only supports sub-6GHz 5G and not mmWave which in the US really impacts Verizon customers.

Since the other networks don’t use mmWave 5G, this was a calculated decision. I will note that it doesn’t seem to support C-Band 5G with is “mid-band” 5G but this could come in the future in the way of a software update IF/ WHEN cellular carriers actually roll that out.

So in the meantime, those whole “oh it’s a big con that is doesn’t support all of 5G” is much ado about nothing.

The other Pixel 5a stuff:

In the month of using it, it didn’t fall out of my hands because its “too slippery”. I may have mastered the art of using my thumb….

As with the other Pixels phones, I like having the fingerprint sensor at the back of the phone to not only unlock the phone and apps but to use it for pull-down notifications. That’s a feature I miss when trying other phones.

The Google Pixel has the Google software so you get the Call Screening feature which is AMAZING. Whenever a call comes in from a number you don’t know you can hit a button and it will inform the called that you are using a screening software and they need to say what the call is about. It then transcribes that on the screen for you so you can decide if you want to answer it or if its about your Expired Car Warranty so you can send that straight to the SPAM caller list.

The headphone jack was there for me to use but since I am using the Pixel Buds, I just used Bluetooth the entire time and I no longer have an AUX cable in my car.

Doing all the things I mentioned right at the beginning was a non-issue. Browse the web, YouTube, Netflix, social media, and the occasional game were all perfectly fine on the Pixel 5A. 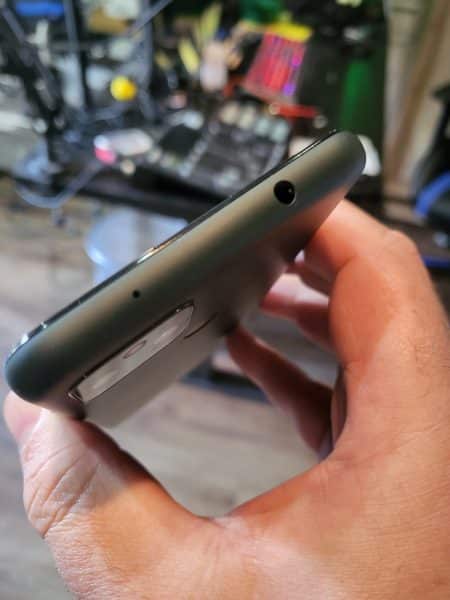 When you are making a buying decision it’s best to identify the one absolute must-have feature you can’t live without. Then find the phones that do that and start evaluating which phone to buy at the price you want to spend.

Too many people are still convincing themselves that because tech reviewers say you need 120Hz that you NEED 120Hz refresh rate for your screen. You don’t.

Remember that tech reviewers typically access a lot of phones and so it’s difficult to keep the perspective of someone trying to make a buying decision. The rule is simple: your new phone needs to improve on what your current phone does, but it doesn’t need to compete with the top-of-the-line flagship phone from any manufacturer.

The question that I always boil down to is this: would I buy the Pixel 5a for $449 today?

The answer revolves around the word TODAY.

If my current phone was broken and I was desperate then does the Pixel 5a do everything I need and a great price – 100% and I highly recommend it.

And that’s how you can a bargain price for an epic phone!

*note: before some wise-ass comment, there is NO sim in the main pic as I snapped that today after removing my SIM and putting it into my next phone I am testing.