Revealing the winners of the Stuff Gadget and App awards

When you want to know what’s happening in the tech world, besides reading this blog, of course, you pick up a copy of Stuff magazine where you find in-depth reviews, interviews, products, toys, gadgets, and everything in between. With such extensive coverage of the local industry, Stuff is in an ideal position to hold an annual Gadget and App Award evening where it officially recognizes the year’s top…eh…. gadgets and apps (hence the award name #JustSaying).

There were several categories, but the most coveted one was the Gadget of the Year award which was won by HTC Vive.

WeChat won several awards proving once again that it is so much more than just a messaging platform. WeChat’s winning included the Financial App of the Year for WeChat Wallet, WeChat also took home the award for the Overall App of The Year and when Stuff readers voted for their favorite app via the website, they chose WeChat again as the winner in the financial services category.

The Computer of the Year category was won by Dell XPS13 knocking Apple’s MacBook Pro and Air devices off the ‘top of the charts’ for the first time in several years.

Other winners included the following: 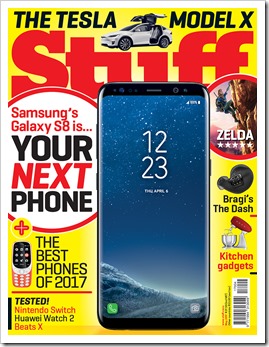 “Apps have become an integral part of consumer tech experience, so it’s only fitting we include them when recognising the best tech of the year,” says Stuff editor, Craig Wilson. “With so many developers doing such excellent work in the app space in South Africa, we expect to see twice as many categories — and nominees — this year.”

For more techie type of stuff, check out Stuff.co.za (and don’t forget to come back here too!!!)