It’s been over a month now using the TCL 10 Pro and the TLDR is this phone isn’t a great phone for $450 phone.

Barring one complaint which I will discuss later, the phone is actually packed with some really epic features which you will love. So if you are in the market for a new phone and don’t want to spend a fortune, then here is why the TCL 10 Pro is more than worthy of your attention!

Fun fact: from Android 9 onwards, the operating software has been able to adapt to your phone usage. The more you use the phone the better it gets. In other words, it takes time before you really know a phone. This is why it really does irritate me when “full reviews” are shown after only a day or two of using a device. In my opinion, it takes time to really get to know a phone and how it really functions in the real-world.

So after a month of using the phone as my daily driver, here is what I would tell you if you ask me if you should buy the TCL 10 Pro.

Note: TCL did send me this phone for the review and TCL is seeing this for the first time like you are.

Let’s address the elephant in the room – by now you would have seen some people question the longevity of the TCL 10 Pro. It comes with Android 10 right out of the box and TCL has officially committing to at least an Android 11 upgrade and security patches every two months for two years. So already there is value in a phone that is $450!

Ok now the best bits – let me show you some epic features you should know:

7 Features of the TCL 10 Pro you will love

The 10 Pro has a mappable button. Not just an option to choose between one or two things, but you can actually launch your own apps. Not sure why this isn’t done on more phones, but super useful. Initially, it doesn’t sound like a big deal. I mean you can click on the icon, but once you use it to clean your phone or launch your most-used app or a host of other features, this becomes a gam-changer. 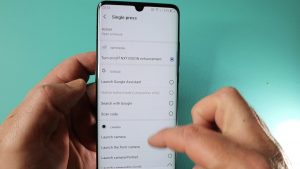 It has one. I know you love your Bluetooth headphones and so do I. I can’t get enough of the Shure Aonic 50 which are must travel headphones. However, when you travel a lot there is a level of comfort knowing you can simply plug your headphone ins and not worry about draining the battery on both the phone AND the headphone.

That is what I look for in a headphone and certainly on a phone too.

Infrared (IR) has largely disappeared from the phone world with the exception of some phones like Xiaomi and Huawei.  I love IR. You download a Universal Remote app and control the TV, the aircon, the streaming box,, and more. You have your phone in your hand anyways so this is such a natural application.

The TCL 10 Pro has its own Universal Remote that easily pairs up to your devices and no more looking for the various remotes! 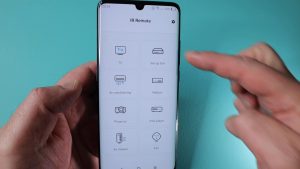 Storage is critical on a phone and besides one brand (looking at you Apple) the rest tend to offer expandable storage. The TCL 10 Pro is no different allowing you to expand the storage with a MicroSD card.

Looking at the phone, this is isn’t obvious but if you look under the SIM tray, you will find the MicroSD card slot. Thankfully. 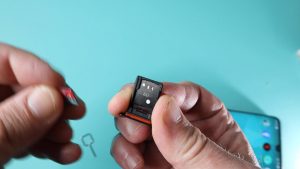 If you are looking for a point and shoot camera, this one will not disappoint. The 10 Pro comes with 24MP front-facing camera and can capture Video at 1080P / 720P @30FPS. It has Quad rear cameras with dual-LED flash: 64MP (ultra high-res) with hybrid auto focus and dual flash.

It has a nice123° super-wide-angle to capture wide scenes and 5MP macro for those close-ups.

The camera options I like are: Slow-mo and Stop Motion and that you can use the Preview Lenses to preview the same scene before you snap your photo.

Stabilization works well and auto focus is pretty quick too.

Check out the TCL Camera in action in the video above to really see it!

Another feature I haven’t seen in a while on a phone is a built-in FM radio which uses your headphone as the antenna. It has some serious speakers that are super loud but they are mono and not stereo.

Putting on some Netflix or sharing a YouTube video with the family was a pleasure as you can really pump up the volume!

While some people complain that the supplied see transparent case has the Display Brilliance etched into it, its nice that is included so your device is protected from day 1 before you head out trying to find a case for it.

My only complaint, and really the only one is that the usage of the curved-screen isn’t the best under all circumstances. This is particularly noticed when playing a game and the options are right on the curve or when watching YouTube and the video curves over the display hiding some of the YouTube options.

This really does take away from an otherwise awesome device and I hope that it can be fixed with an update of some kind.

The phone is so good, that my wife has now adopted it as her main phone and she is delighted with everything it has to offer. I said it before and I will say it again – the cell phone battles are in the mid-range phones and TCL has come out ready to swing!

For more info check out the TCL 10 Pro

Also, check out how to pick the best phone insurance for your phone….just in case anything happens to your device!