“Has anyone seen my child?!?!” This has to be a parent’s worst nightmare. Thinking your child is safely playing on one of the swing sets with the other kids, and then looking up and not seeing him/her….

Clare Matthes was given the opportunity to test a solution from Alcatel that I wish was around when my kids were much younger.  Unfortunately, in today’s strange world, this is now a must-have device that every parent needs. This is Clare’s Report:

I couldn’t contain how excited I was when Alcatel gave me the opportunity to take one of their smartwatches through a trial run. I’d had been told it was more for a junior market and aimed at children which excited me even more. Unfortunately, when I unpacked the bright orange, blue, and yellow toy-like time teller, it wouldn’t wrap around my wrist and instead, I enlisted the help of a younger confidant. With his parents’ permission, I could stalk him to my heart’s content.

So, little Mogale aka Mo agreed to wear the Move Time watch and help me out with my research for a few weeks.

First off, Alcatel is not the only electronics manufacturer out there offering up an option on the kid’s wearable but it looks like their wearable is one with a whole lot of character. Let’s face it, this type of wearable has come about to put parents’ minds at ease, so why not make it brightly coloured and fun-looking, so kids like it too.

In short this childrens’ smartwatch is equipped with GPS tracking, and call and message functionality which helps parents stay connected with their offspring.

Intended for children between the ages of five and nine, the Move Time watch allows parents to call or send voice messages, while the kids can reply to calls from up to 10 pre-set contacts and make calls to five registered numbers because the watch supports 2G network connectivity, so it needs a SIM card.

The interface of the watch is very simple and makes navigation easy. Parents can track their kids’ location on their smartphones with the help of dedicated iOS and Android app and are alerted, when the children enter or leave a pre-determined safe zone.

Rest assured, the unit it pretty rugged and child-proof. It’s manufactured from the same rubber and in the same vein as most fitness trackers that adults wear.

The watch has an IP-65 rating, which allows kids to splash around in water without any concern of damaging it. Swimming with it, however, is not really advised.

The Move Time has a 0.95″ screen with a 96x64px resolution display. Don’t expect any beautiful pictures however as the display is monochrome OLED. It also only weighs 40g.

The button on right-hand side of the face is for an SOS signal and power on/off.

All in all, Mo loved wearing the watch, hated being tracked by his mother but didn’t mind me so much. The real appeal to him was that his friends were envious and he could see the route he’d run at Parkrun on Saturdays. He did mention that the battery only really lasted a day, when he was wearing it. 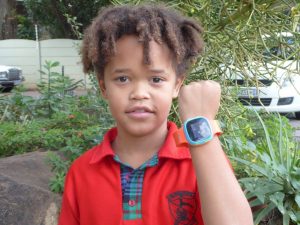 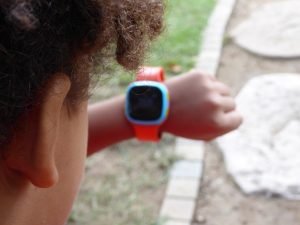 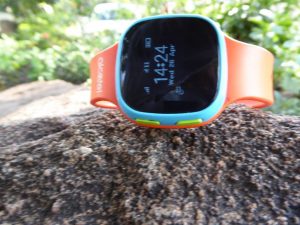 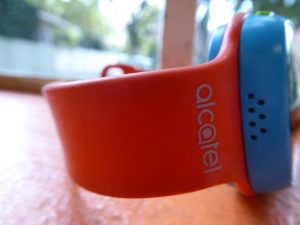 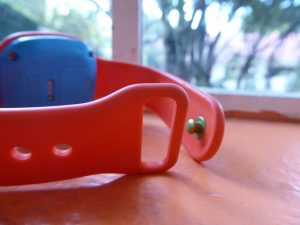 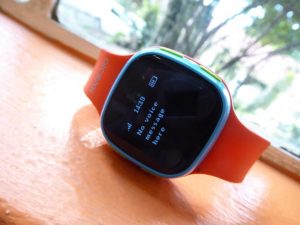 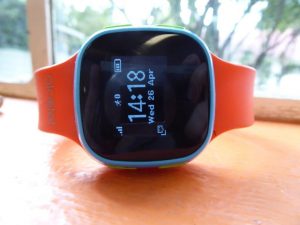 Clare’s father swears she was born waving spirit fingers and singing tah dah in an oh-so-dahling-showbiz-esque manner. Nicknamed “Schnauze” because of her smart mouth and quick whit, Clare