Unlike OTHER companies, Samsung hasn’t abandoned its loyal Note customers as they want you to buy their latest device – the  Galaxy Note 2.

On the contrary. Samsung has taken features from their most popular phone, the Galaxy S3 and from the Note 2 and have created an update for the current Note owners.

The new  over-the-air update is currently being circulated around Germany and will be making its way globally soon.

Using the Android 4.0.4 Ice Cream Sandwich (ICS) as the base Operating System, the new Launcher and User Interface has been radically updated. Note owners will also get some of the cool features from the S3 and Note 2 such as:

Everyone is pushing for seamless cloud services and Samsung has already announced a deal with Dropbox to provide online storage and backup of photos and videos. Now it has includes Contact Backup too. I hope this will assist in keeping the desktop/ cloud/ phone contacts in synch.

At the time of this post, South Africa hasn’t received the update (both via Kies nor via OTA). As soon as I do, it will be posted ! 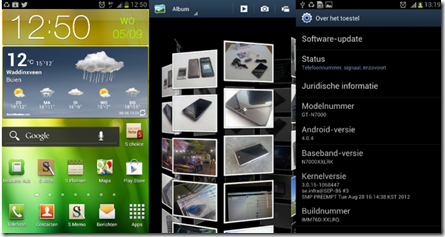 Note: if you are brave enough, you can manually force your device to update. there are lots of articles on the web showing how. Its not advisable in my humble opinion as the horror stories of how wrong this can go far outweigh the reward of getting the update sooner then its official release. You have been warned…

Liron Segev is an award-winning blogger, YouTube strategist and Podcast. He helps brands tell their stories in an engaging and real way that regular consumers can relate to. He also drinks too much coffee!

An absolute must have: The On the Go cable

Tips and Tricks for the Samsung Galaxy Note 2

Report back from the Samsung Galaxy Note II World Tour

This site uses Akismet to reduce spam. Learn how your comment data is processed.

Tweets by Liron_Segev
We use cookies to ensure that we give you the best experience on our website. If you continue to use this site we will assume that you are happy with it. See the Privacy Policy hereOk