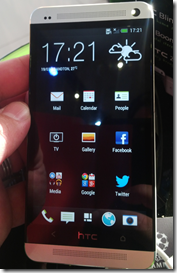 I attended the launch of the HTC One in South Africa on the 19th March. I was keen to see what HTC has invested into the HTC One as by its own admission they “have been lagging behind”.

The new HTC One looks like a well designed Swiss watch with meticulous attention to detail. It not only looks great in its aluminium body but it feels very comfortable to hold too with its 4.7 inch screen and 1080 x 1920 pixels screen that has 469 ppi – the highest rating compared to the Galaxy S4 (441ppi), iPhone 5 (326 ppi), Z10 (355 ppi|).

Jon French, VP for HTC in Middle East and Africa, explains that the HTC One has three offerings that have mass market appeal and are unique to HTC.

The HTC One includes the HTC UltraPixel Camera which is has been designed not to have more megapixels but rather has the ability to capture 300% more light than most leading 13 megapixel cameras. This makes the images clearer, sharper and reduces the noise factor.

When we take a photo we are capturing a moment in time. A moment in time is not just a still image but rather sound too and so the HTC One automatically captures up 20 photos and a 3-second video. This created a “picture” that comes alive. These images can also be shared to HTC Zoe™ You can also choose the best photo to take and even remove objects from your photo – as Jon explains “it is the difference between deleting the photo and sharing it with your family”

Here HTC has hit on a specific pet hate of mine. Most phones have their speaker on the back and this makes it very frustrating when you try show someone a video clip or ask them to listen to your new music.

HTC has placed dual frontal stereo speakers powered by built-in amplifiers to deliver  quality sound. As the twin speakers are on the front of the phone and sound is directional, this has greatly improved the quality of the sound even in a crowded noisy room.

HTC has taken the view that when you look at your phone hundreds of time a day you should not be looking for the apps that give you the info you want. So HTC BlinkFeed is the ability to pick selective information from the social networks, news and various 1200 content providers which will be steamed live to your home screen.

You can set the setting not to have the feeds update automatically so you can control when the info is updated and therefore reduce the spend on data.

Whilst no set date has been given as to when the HTC One will be available in South Africa, it looks likely to be with Vodacom and Cell C by end of April. No pricing has been released as yet either.

HTC has just one mission – to get the phone into people’s hands. HTC is confident that once the consumer holds the phone and compares it to the competitors, they will choose HTC One of the rest. 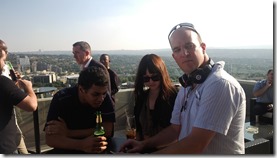 Liron Segev is an award-winning blogger, YouTube strategist and Podcaster. He helps brands tell their stories in an engaging and real way that regular consumers can relate to. He also drinks too much coffee! Connect on: Twitter: @Liron_Segev YouTube: YouTube.com/LironSegev Instagram: @TheTechieGuy LinkedIn: Liron Segev

Can a $50 budget WiFi Router be any good for fast WiFi Internet, Streaming and Gaming?

Why are these STM laptop bags the best laptop bags for every situation: Myth 28L, Myth Brief, Grace Pack

How to STOP the Samsung ONE UI battery drain on your Galaxy S9, Note 9 and S10

This site uses Akismet to reduce spam. Learn how your comment data is processed.